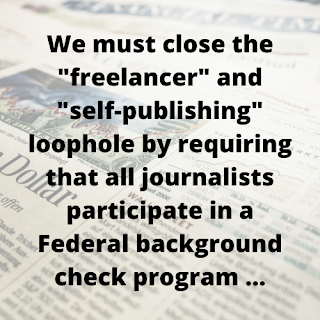 With the advent of blogging, podcasts, and social media, anyone can claim to be a journalist these days. I believe that while California's new law restricting freelance journalists to 35 stories per year is a step in the right direction, we must do more to regulate journalists, including licensing and mandatory background checks.

Firstly, we need to begin requiring universal background checks and licensing for journalists. Currently only journalists directly employed by a major news organization are subject to background checks as part of their employment. We must close the "freelancer" and "self-publishing" loophole by requiring that all journalists participate in a Federal background check program prior to publishing each and every article they write. The journalists should also be licensed as part of this program, requiring that they pay a yearly fee of at least $150 to their state government to properly register their status as a journalist. Please note that this license is only a license to practice journalism in their home state, and other states may or may not accept this license. Some states, such as Maryland, may not accept out-of-state licenses at all.

California is too generous with 35 articles per year. We must urge for national legislation restricting ALL journalists to be restricted to one article per month, unless they are willing to pay an extra $500 per year licensing fee and submit to additional background checks to be considered a professional journalist, at which point they will be allowed to write 35 articles per year, in line with the California law.

Journalists should also be restricted in what type of equipment they're allowed to use to write their articles. They should be restricted to electric or manual typewriters, as long as those typewriters cannot exceed 35 words per minute. Production of future devices which can exceed 35 wpm will be prohibited, and a $200 federal tax stamp will be required for any existing devices when they change ownership.

Steps also need to be taken to prevent "assault journalism", in which a journalist uses not only written words, but photos, videos, or sound. "Assault journalism" should be banned outright, and any journalist found using such techniques be permanently prohibited from ever writing an article again.

If you're a journalist absolutely horrified by this opinion article, then do take a breath, as it is satire. These restrictions are almost identical to the ones being called for against firearm owners across the country. Perhaps now you understand how we feel.

This is an editorial by Ken Buckler, editor of WashCo Chronicle.