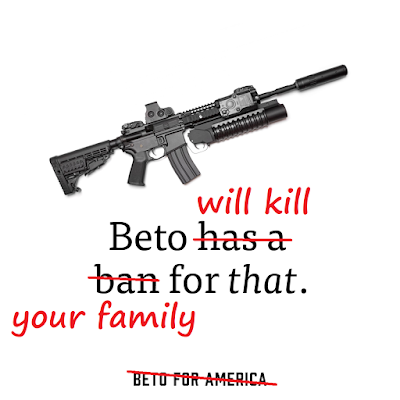 Last night during the Democrat Presidential debates, Beto O'Rourke (D-Texas) stated that he will ban AR-15 and AK47s, requiring that these firearms be sold back to the government. With over 15 million AR-15s in the United States, that's going to be a serious problem.

First, let's do the math on this. Typically an AR-15 cost anywhere between $500 to $1,000. After accessories, this could be well over $2,000 or beyond. If someone spent $1,000 on a firearm, they are not going to willingly sell it back to the government for less than $500, even under threat of imprisonment.  So what would be the minimum cost of such a mandatory buyback program?

Completely disregarding any associated marketing costs, overtime costs, processing costs, or any other cost - the cost for the Federal government to purchase every single AR-15 in the United States is $7.5 billion.

Of course, that's assuming Americans comply. New Zealand's banning of semi-automatic rifles has resulted in only a small fraction of the privately owned rifles being turned in.

And of course, it's easy for O'Rourke to campaign for taking these rifles from the law abiding owners because he doesn't have to be the one to actually take the rifle.

Instead, it would be law enforcement officers putting their lives on the line, conducting no-knock raids to confiscate rifles from owners who refuse to give them up. The end result? People are going to die. Either the firearm owners themselves, or law enforcement officers who have been instructed to confiscate the weapons - people who otherwise would be law abiding citizens will become felons because of something they lawfully acquired. If only 10% of AR-15 owners resist confiscation, that's approximately 750,000 to 1.5 million people who may lose their lives. Is confiscating firearms from otherwise law-abiding citizens truly worth that potential death toll?

There's an excellent editorial in the Washington Post titled "Don't support laws you are not willing to kill to enforce". Make no mistake, when Beto O'Rourke says that he's "gonna take your AR-15", he's willing to have you and every other gun owner in the country killed in the process.

Ken is the editor of WashCo Chronicle.