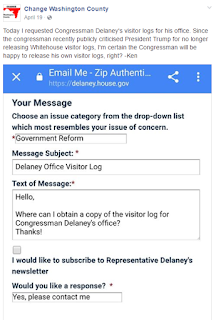 Delaney's original statement is below:

“President Trump’s actions betray a fundamental contempt for democracy and a lack of respect for the American people. It is now clear that this country is being subjected to a deeply secretive presidency, one that believes the public is not worthy of knowing even a bare minimum about their activities and conflicts of interest. Long-standing norms that were respected and followed by leaders from both parties are being brazenly ignored by President Trump. The question remains: what is the President trying to hide?”


This failure to respond is quite hypocritical of the congressman, who claims to be a supporter of government transparency, but fails to disclose in a timely manner the same visitor logs which the White House is keeping secret.

Delaney's failure to disclose his own logs further display his complete disregard for his constituents, and his insistence on simply towing the party line. As a reminder, Delaney only became congressman after Democrat governor Martin O'Malley gerrymandered Maryland's 6th Congressional District, which is probably only slightly better than Maryland's 3rd Congressional District.

So I ask you, Congressman Delaney, what are YOU trying to hide?

Ken is the editor of the WashCo Chronicle.