This article is part of a series of looks into the activities of local non-profit and government organizations in Washington County.

UPDATE: WCTA has moved the "parasite" verbiage from their webpage, but refuses to return any requests for comment regarding this issue.

HAGERSTOWN, MD - In an online document published by the Washington County Teachers Association, non-member teachers are referred to as "a parasite living off the commitment of members paying to support a strong organization."

The webpage, titled "Answering The Hard Question About Joining the Association", is currently located at the WCTA website at http://washington.mstanea.org/answeringhardquestions.htm. (Note: This document has been modified since publication of this article. For a view at the original copy, please view this link.) The document is designed to be used by WCTA representatives to get non-member teachers to join the Association.

The webpage also states that "Individuals who do not join are freeloading off members who do. Those in the school system who pay and support negotiation services also pay to support salary gains for non-members." 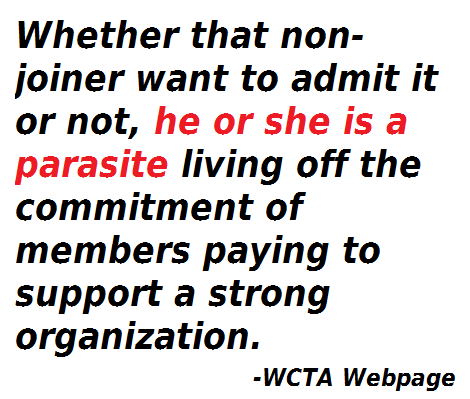 And in a rather disturbing question, "If non-members don't want to join, would they be willing to turn their salary gains back to WCTA to be distributed to the members who paid the freight?"

Finally, the document also make multiple references to legislators not acting on the letters of voters, and that only lobbying will produce results. "'writing letters to your legislative representatives' does not produce legislation. It takes a powerful legislative lobbying effort, which is provided by WCTA, MSEA and NEA."

The fact that WCTA makes the claim that joining is the only way for teachers' voice to be heard by legislators is very interesting, considering the WCTA IRS filings state that they do not engage in direct or indirect campaigning, and have left blank for the past three years if WCTA participates in lobbying activities.

In 2010 the WCTA donated $430.00 to Karen Harshman's Board of Education campaign, but only after she won the election. Requests for comment from the WCTA have gone unanswered.

Additionally, WCTA president Denise Fry participated in an press conference at WCPS owned site for the future West Elementary school - a press conference which was not authorized or supported by WCPS or the City of Hagerstown, intended to criticize Maryland Governor candidate Larry Hogan's plan for reforming the state's budget.